This one is “Describe how many and what types of pets you have”.

I am a big animal lover and all my life I grew up with a shit ton of animals. When I was younger my mom would bring in every stray animal she found and I think at our peak we had 27 cats and 6 dogs… and a couple of pot bellied pigs. No we were not animal horders… well not me anyways, she may have been now that I think about it.

Anyways, I refuse to have that many animals because they just plain piss me off most days but I do love the animals that I have.

Ok so I have 4 dogs in all. I have 2 pitbulls who live outside to protect the house and property. I know it sucks that they have to live outside but they have a huge yard and an awesome dog house, plus if they came inside they would literally destroy everything.

My other 2 dogs are Olde English Bulldogges. These are my pride and joys… they are just the most awesome dogs in the world and mighty expensive too. They have the best personalities and are so so so smart. If you ever have a couple thousand dollars to spend on a dog I highly recommend these guys. They are the best… but only if you get them from a good breeder, don’t cheap out and get a scrappy bulldogge. My female bulldogge is from blue ribbon champion bloodline and my male is just a bad ass. 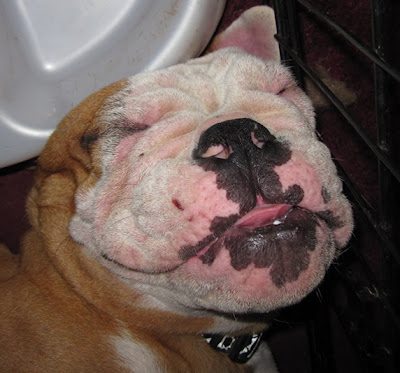 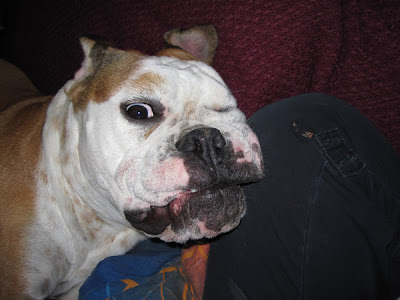 Next I have 3 cats. 2 of them are brother and sister and I have had them since the moment they were born. I adopted a cat about 9 years ago and it turned out that she was pregnant (I didn’t know this) and shortly after I got her she gave birth to 8 kittens. Luckily I was able to dump the other 6 on my mom and sisters because I sure as hell did not want 9 freaking cats. So I kept a brother and sister and the mom but the mom ran away after a few months. Later on a cute little kitten showed up at my house and refused to live so after trying to make it go home for a few weeks I decided to keep it. That’s the story of my 3 cats.

Finally I have a shit ton of fish but the most awesome of them all is my huge Red Tiger Oscar. I got him when he was about the size of a quarter and I didn’t know how big they got. Well here it is a year later and this damn fish is a foot long and still growing! I have to upgrade my aquarium pretty soon because he is outgrowing it.

Welp, that’s my animals in a nutshell. I have quite the little furry family don’t I?

Check me out on my sexy OnlyFans!
Email me for custom videos kinkykristi@gmail.com
Tags:about me, blog challenge

My name is Kristi and I am an independent content producer. I have been indulging in your naughty fantasies since 2004.

I have produced hundreds of fetish videos and I particularly love the taboo mom fetish and I thought it would be awesome to have them all together in one place for your enjoyment which is how TabooKristi was born.

You can order your own personalized custom video by emailing me at kinkykristi@gmail.com